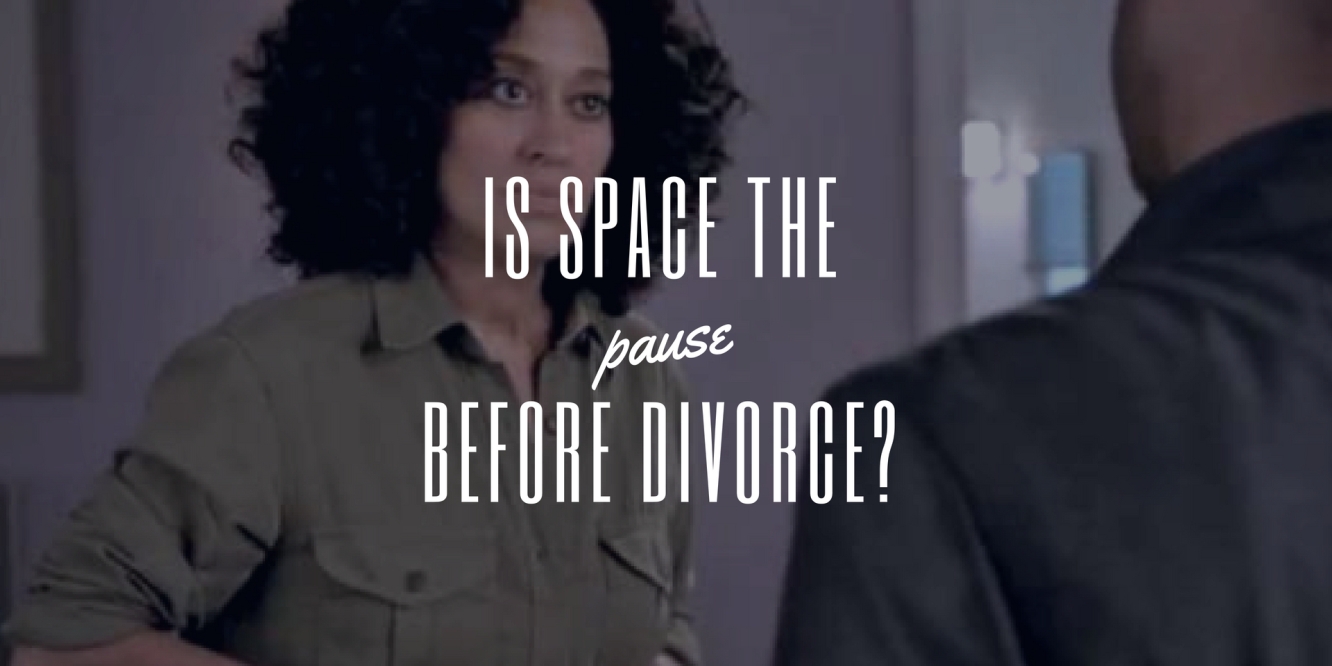 May 9, 2018’s episode of Blackish explored the topic of space in a marriage. In the previous two episodes we saw Bow and Andre hit a pretty rough patch in their marriage and make a decision to give each other space.

In the latest episode we got to see what space looks like for the Johnson family. They decided on “nesting” as a method of coping with the separation. They explained “nesting” to their children as the children remaining in the home while they rotated between a shared apartment and the home in an effort to maintain some consistency in their lives.

For a moment, it felt like the show was going to take a quick turn to the Johnsons reconnecting and bringing their family back together. In that moment I thought, this isn’t how it would go down in real life. They wouldn’t come back this quickly. No one gets over the issues they were having that fast. I mean, there were so deep issues that went unaddressed for so long that it would take a while to get back to their normal. But I also want them to get it together, so I was excited for that prospect, no matter how unrealistic.

Knowing that things take time, does space hurt or help? Is it just a pause before divorce? Can you come back from space? I remember in the beginning of my marriage when I told my husband I wanted space, he told me there is no such thing in marriage. He told me that we don’t have the luxury of being apart because nothing gets worked out that way. How can you work on your marriage if you aren’t living in the same house? I believed that then. I still somewhat believe that now. But, I also believe that if done right, space doesn’t have to be the pause before divorce.

I think, in Bow and Dre’s case, space could help them if they continue to focus on what’s important – the marriage. Separately, they have to put their intentional focus on their marriage and addressing the issues they’ve let fester in the relationship. They have to communicate with one another and actually hear each other. They have to listen as the other speaks to be heard and to hear what hasn’t been said. What we have seen is that Dre and Bow love each other. They love the relationship they had. They love their family. Their children. What I see is that they just don’t know how to get back to those things.

They hear all of the stories from their youth and feel all nostalgic but when those feelings wear off they’re back to the cold reality of their situation. The reality is they stopped communicating. Dre stopped communicating when his feelings were hurt. Sopped communicating that he didn’t do things for Bow because he felt underappreciated. He felt that his gestures weren’t good enough, so he just stopped doing them. Bow stopped speaking her mind because doing so caused fights. She stopped feeling like she could be open with her friend, her partner, her lover. She started feeling trapped.

When they let those things go unchecked, that’s when the divide began. They started bickering with one another. They let the little things become big things. Now, it seems like there is no coming back. They say they are separating to come back together but they’re perpetuating the same problems because they’re still not communicating. They’re still not talking to each other like friends. They aren’t treating one another like the people they have spent the better part of 20 years with. The people that were there when things were rough, the people who cared for each other in the down times, and the people who lifted them up and celebrated them in the good times. If they started treating each other with love again then they can find their way out of this, but if they continue treating each other like this, they’ll never come back.

This will most definitely be the pause before divorce. The end is near. We were left with Andre saying he thinks they need more than space. Now the tides have turned. The previous episode showed us Bow saying something she didn’t mean and now we see Dre doing the same. It is so obvious they want their marriage to work but they’re both too stubborn to adjust to the other. Instead, they continue to bicker and fight, argue in front of their family and children, and tear one another down with their words. The children are starting to crack under the realization that their parents’ marriage isn’t as perfect as they thought. It isn’t as put together as they made it look. There are holes within it. They are starting to realize that divorce is a possible outcome of the fighting they’re seeing and they’ve been forced to reconcile their internal hope of reconciliation with the reality of a pending divorce.

From the last episode, this time of space is just the pause before divorce. I for one hope they can get it together.

Until next time, journey on!

One Reply to “Is Space Just a Pause Before Divorce?”